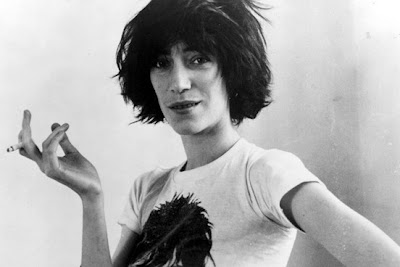 The 18-song LP spans Smith's entire body of work, from her 1975 debut all the way to her cover of Nirvana's Smells Like Teen Spirit in 2007. The special package will also feature brief recollections of each song written by Smith herself.

Smith has released ten studio albums across her career, the latest being 'Twelve' in 2007, which was an album of cover versions of artists including Jimi Hendrix, The Rolling Stones and REM.

She has recently released a memoir, which is titled 'Just Kids' and tells of her life in New York with photographer Robert Mapplethorpe, which I blogged about in May.

The tracklisting for 'Outside Society' is as follows:

'Gloria'
'Free Money'
'Ain’t It Strange'
'Pissing In A River'
'Because The Night'
'Rock 'N' Roll Nigger'
'Dancing Barefoot'
'Frederick'
'So You Want To Be A Rock 'N' Roll Star'
'People Have the Power'
'Up There Down There'
'Beneath The Southern Cross'
'Summer Cannibals'
'1959'
'Glitter In Their Eyes'
'Lo And Beholden'
'Smells Like Teen Spirit'
'Trampin'
Posted by Alpines at Thursday, October 13, 2011